Stand Up to Youth Suicide: Rally in San Francisco October 8 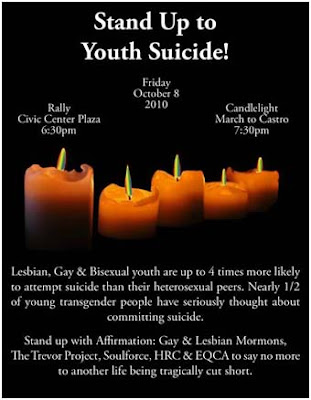 GSA NETWORK is co-sponsoring this Rally and March to Focus on LGBT Youth Suicide and Homelessness on Friday, Oct. 8th.

Being young and gay in much of the too often results in homelessness or suicide. A rally and candlelight march in on Friday, October 8, is planned to bring awareness to what some have called an epidemic.

The event is being organized by:
Affirmation: Gay and Lesbian Mormons, and will features speakers from The Trevor Project, Soulforce, Human Rights Campaign (HRC), Equality California, Affirmation, and several of the people appearing in the recent documentary film "8: The Mormon Proposition," according to Robert Moore, Director of Outreach and Advocacy for Affirmation.
Posted by About at 12:46 PM

Seth Walsh, a 13-year-old from Tehachapi, California, died on September 28th after he hung himself nine days before because of years of bullying he endured for being perceived as being gay, according to his peers.  This is the sixth teen suicide we’ve seen in the past month that is closely linked to anti-gay bullying and harassment.

We have to prevent future tragedies by strengthening our efforts in schools to address bullying no matter what the reason.

Governor Schwarzenegger can also do his part to help prevent future tragedies by signing a bill this week that would enable countless at-risk youth to access mental healthcare services and to receive the support and care they need to thrive.

The Mental Health Services for At-Risk Youth Act (SB 543) would expand access to essential mental health services, especially prevention and early intervention programs, for youth ages 12-17 by allowing them to obtain counseling without parental consent. The bill is currently on the governor’s desk.  SB 543 was introduced by Senator Mark Leno (D-San Francisco) and is co-sponsored by Equality California, the National Association of Social Workers California Chapter, Mental Health America of Northern California, and the GSA network.

We call on Governor Schwarzenegger to sign the Mental Health Services for At-Risk Youth Act (SB 543).  This law would give youth, like Seth Walsh, access to life-saving mental health services before it’s too late.

School has been in session for only a month, and already the news this week carries the sad stories of six gay kids who have killed themselves in the face of outrageous and unrelenting taunting. We each need to take an aggressive stand to stop this bullying today.

Seth Walsh, 13 y.o., dies today after hanging himself in a tree, when he couldn't handle the nonstop, anti-gay bullying at his middle school in Tehachapi, CA.

Asher Brown, 13 y.o., killed himself with a 9mm Beretta in Texas last week after enduring what has been described as constant, anti-gay harassment at his middle school.

Tyler Clementi, 18 y.o., plunges to his death in the Hudson River last week after his roommate at Rutgers University secretly films him having sex with another guy, and streams it on the Internet.

Justin Aaberg, 15 y.o., kills himself in Anoka, MN, in July, after bullying at his high school, compounded with a recent breakup.

Billy Lucas, 15 y.o., was perceived to be gay by students at Greensburg High School, was called a "fag" and told that he didn't "deserve to live". Two weeks ago, he went into his barn at their home in Indiana and hung himself.

Eric Mohat, 17 y.o., of Mentor, OH was harassed so mercilessly in high school that when one bully said publicly in class, "Why don't you go home and shoot yourself, no one will miss you," he did, earlier this year.

******************
Chris Kryzan volunteers for Spectrum's Speakers Bureau, which reaches nearly 3,000 students in Marin County schools each year. The goal of the Speakers Bureau is to create safe and inclusive classrooms for all students by shattering stereotypes about lesbian, gay, bisexual, and transgender people. Volunteer speakers share their personal stories and challenge students to avoid language and actions that promote bigotry, discrimination, and violence against other students. For more information, visit www.spectrumlgbtcenter.org.
Posted by About at 9:18 PM

Domestic Violence and Sexual Assault in the LGBT Community: A Workshop for Service Providers

Domestic violence is not unique to the heterosexual community and in fact occurs at approximately the same rate in LGBT communities. Domestic violence can occur between intimate partners, in the home or in families and LGBT people (especially youth) are at a greater risk of experiencing violence in the home. LGBT victims of domestic violence or sexual assault face the same issues as any other survivor and also face unique challenges due to societal homophobia, transphobia and heterosexism.

This workshop provides an overview of issues related to domestic violence and sexual assault in the lesbian, gay, bisexual and transgender (LGBT) community.


About the instructor: Cristin Brew, MFT has been working with the LGBT population for the past ten years at Spectrum. Cristin received her Master’s degree in Counseling Psychology from John F. Kennedy University and also has a degree in Early Childhood Education.